The maximum acid value refers to the free fatty acid content in a cargo for each coating system and is detailed in Note 3 with the acid value being determined by the ISO 660 (1996) method.

For guidance only, the acid values determined by ISO 660 (1996) are related to the approximate weight percentage of free fatty acid as mentioned below:

TRIS is based on practical tests carried out on pure and/or commercial cargoes. The composition of many commercial cargoes contained in this resistance service are subject to change and therefore may vary in composition. PPG has no control over the composition of these cargoes, their sequence or the conditions of service and expressly disclaim any responsibility for the results obtained from their use or for any incidental or consequential effects of any kind. Concentrations mentioned are expressed in weight percentage.

Absorption of cargo by the coating may occur and subsequent desorption is dependent on factors such as temperature, ventilation, humidity, absorbed components, tank cleaning procedures etc.

Contamination of cargo by the coating may occur but is usually limited to the first cargoes after application of the coating and should be taken into account for sensitive cargoes such as edible and potable cargoes and cargoes with a high purity such as fiber grade glycol. Such cargoes should be avoided in the early life of the coating system.

Given the subjectivity of taint and taste, where this may be relevant it is recommended that the client first carries out testing of cured panels of the chosen coating in contact with the cargo, to ensure suitability.

Chemical reaction between cargoes may well result in the formation of products which may cause breakdown of the coating.

To avoid cargo contamination, care should be taken that any previous cargo retained in the coating is desorbed prior to loading of the next cargo and that effective tank cleaning procedures are used. PPG does not accept any responsibility or liability in relation to cargo contamination whatsoever.

CAS registry numbers are unique numerical identifiers for chemical compounds, polymers, biological sequences, mixtures and alloys. They are also referred to as CAS numbers, CAS RNs or CAS #s. Chemical Abstracts Service (CAS), a division of the American Chemical Society, assigns these identifiers to every chemical that has been described in the literature. The intention is to make database searches more convenient, as chemicals often have many synonyms.

A synonym is another name for the same chemical or composition. One chemical can have a number of different names or synonyms, e.g. Methyl Alcohol is a synonym for Methanol.

To enable better identification of the cargo to be transported/stored, CAS numbers can be used to find chemicals in TRIS and synonyms are listed on the results pages.

Isomers are molecules with the same molecular formulas: the number of atoms of each element is the same — but the specific arrangements of atoms and bonds differs. In TRIS, several isomers or mixtures of such compounds may be mentioned in the synonym list even though they are not one exactly same chemical, if the coating systems are considered to have the same resistance to these chemicals.

Some products may cause surface discoloration of the coating, which is difficult to remove by tank cleaning operations, and subsequent cargo contamination is possible. Discoloration is normally a surface phenomenon and in itself does not necessarily constitute a defect. See also Note 2.

PPG does not accept responsibility for coating discoloration and cannot be held liable for any aspect of cargo tank or cargo acceptance and consequences thereof.

There are 3 distinct curing states; Full Cure, Post Cure and Hot Cure. All three states do not always apply to all coatings.

This applies to all coatings mentioned in TRIS and is the minimum curing time required for carriage of non-aggressive cargoes (cargoes without notes 4, 7 and/or 11). These minimum times are detailed in the curing tables found in the product data sheets of the respective products.

For PPG SIGMAGUARD 750 the full cure is equivalent to full resistance and no further curing is required for service.

This is only required for PPG PHENGUARD series tank coating systems and only a requirement when Methanol or Vinyl Acetate Monomer are to be stored/carried (also see Note 4) and cannot be substituted by a carriage/storage period of 3 months of non-aggressive products.

However, to obtain maximum resistance in the shortest possible time a hot cure is generally recommended.

Prior to the hot cure, in all cases, the full cure must have already been achieved.

For double hull vessels, hot curing can be carried out using hot water and the butterworth system as detailed in the PPG PHENGUARD TANK COATING - HOT CURE.

All references to "gas-free" refer to a steady state gas free condition. The most common value taken for gas free and that recommended by PPG is below the LEL (Lower Explosive Limit) however, the MAC value (Maximum Allowable Concentration) is also sometimes used. For further details on gas-free recommendations and ventilation guidelines see Ventilation. However, this information is only given as a guide and PPG cannot be held responsible for the effectiveness of ventilation procedures.

This categorization is shown in TRIS for information purpose only and should be validated by the client via IMO, relevant agencies or organizations.

The information below is taken from the IMO 'International Code for the Construction and Equipment of Ships carrying Dangerous Chemicals in Bulk' (IBC Code 2007 Edition). Please note that IMO should be consulted to confirm the classification. PPG will not accept responsibility for specification changes of cargoes or conditions of transport due to changes in classification by IMO.

Note: cargo classification to a certain ship or tank type does not indicate a cargo's aggressiveness to a coating system.

Cargoes listed in Chapter 17 of the IBC Code have been evaluated with regard to environmental and safety hazards and subsequently assigned for carriage in vessels meeting a certain design specification. The design criteria for the 3 various ship types 1, 2 and 3 are detailed in the IBC Code and are as follows:

A type 1 ship is a chemical tanker intended to transport chapter 17 products with very severe environmental and safety hazards which require maximum preventive measures to preclude an escape of such cargo.

A type 2 ship is a chemical tanker intended to transport chapter 17 products with appreciably severe environmental and safety hazards which require significant preventive measures to preclude an escape of such cargo. 2(k) denotes that ship type might be subject to regulation 4.1.3 of Annex II of MARPOL 73/78.

A type 3 ship is a chemical tanker intended to transport chapter 17 products with sufficiently severe environmental and safety hazards which require a moderate degree of containment to increase survival capability in a damaged condition.

Thus, a type 1 ship is a chemical tanker intended for the transportation of products considered to present the greatest overall hazard and type 2 and type 3 for products of progressively lesser hazards. Accordingly, a type 1 ship shall survive the most severe standard of damage and its cargo tanks shall be located at the maximum prescribed distance inboard from the shell plating.

Chapter 18 chemicals (denoted by a * in the IMO column) are those which have been reviewed for their safety and pollution hazards and determined not to present hazards to such an extent as to warrant application of the IBC Code.

After carriage of alkaline cargoes, wash water generated by tank cleaning operations will be alkaline. The wash water residues must be completely removed and not left in the tanks or loading pipes.

Although the organic coatings themselves are resistant to several inorganic acids in various concentrations, PPG cannot accept these chemicals as cargoes. This being due to the very serious pitting of the steel and undercutting of the coating system that can be caused by the inorganic acid, in areas of damage to the applied system.

PPG SIGMAGUARD 750, PPG DIMETCOTE 9 and other zinc silicate coatings, are not resistant to acids or alkalis. Their suitability is limited to products in the pH-range between 5,5 to 9. The use of acidic or alkaline tank cleaning products must also be avoided.

Regular Transport of Methanol and Ethanol

A non-aggressive cargo is defined as a cargo detailed in the resistance list which is not accompanied by any of the following notes: Note 4, Note 7 and/or Note 11.

Conversely, cargoes with any of the above notes are considered to be aggressive cargoes.

Tank repair should be carried out with compatible coating systems of the same or better chemical resistance. For more information contact your PPG representative.

Application of the systems must be carried out in accordance with the respective product data and relevant information sheets.

For the information from the TRIS system to be valid, the first coat of the system must be applied directly to the steel substrate which has been abrasive blasted cleaned in-situ to a minimum of ISO 8501-01 SA 2½, freed from rust, scale, water soluble salts and other foreign matter. For more information and allowed soluble salt levels, see Information Sheet "Cleaning of Steel and Removal of Rust".

After application of the full system has been completed, the system has to be cured under specified conditions (see also above CURING).

Exposure of the coating to an aggressive cargo before the coating has obtained the required cure, may permanently affect the resistance properties of the system.

This list is not valid when shop primers are present under the coating system. Shop primers must be completely removed.

When part of the structure is of stainless steel, the blasting profile of the stainless steel substrate should be the same as for mild steel as is specified in the respective product data sheet.

Whilst a list of tank cleaning chemicals suitable for use with our tank coatings is available, PPG does not advise on specific tank cleaning procedures or regimes. For detailed advice on this subject we recommend contacting one of the specialist tank cleaning companies.

Generally cargoes are stored and transported at ambient temperatures up to 35°C.

For highly viscous cargoes, maximum storage temperatures are indicated in degrees centigrade (°C). Loading and discharge temperatures may be up to 10°C higher. However, the period for which the cargo is kept at these higher temperatures should be kept as short as possible and must not exceed 48 hours.

The temperature to which high viscosity cargoes have to be raised for loading and discharging have been obtained from organizations engaged in the transport and manufacture of such chemicals. PPG cannot be held responsible for the consequences of changes to the chemical composition or quality due to heating of cargoes.

For less viscous cargoes, which do not require heating to reduce viscosity, no maximum temperatures are stated. This means that, for these cargoes, no higher temperatures are allowed than those occurring in world-wide storage or transport under ambient conditions. For cargo temperatures above 35°C PPG should be consulted.

Aggressive cargoes (which reference notes 4, 7 and/or 11 in TRIS), should not be carried in tanks adjacent to those having higher temperatures than allowed for these aggressive cargoes.

In order to extend the service life of the coating, after carriage/storage of aggressive cargoes (which reference notes 4, 7 and/or 11 in TRIS) and before carriage of another cargo or water contact, it is necessary to allow release of absorbed cargo by fully ventilating the tank followed by storage/carriage of a non-aggressive cargo for at least 10 days.

The measures detailed below are given as a guideline for a suitable ventilation procedure, they should not be interpreted as a comprehensive set of instructions for every vessel as the requirements and procedures vary from vessel to vessel and are dependent on / influenced by such things as cargo store/carried, tank size, tank configuration, pump capacity, ambient temperature, relative humidity etc.

These guidelines are also not intended to have priority over any local, national or international rules or laws.

Below generic illustrations are given for descriptive purpose only and are not to imply detailed work procedures. 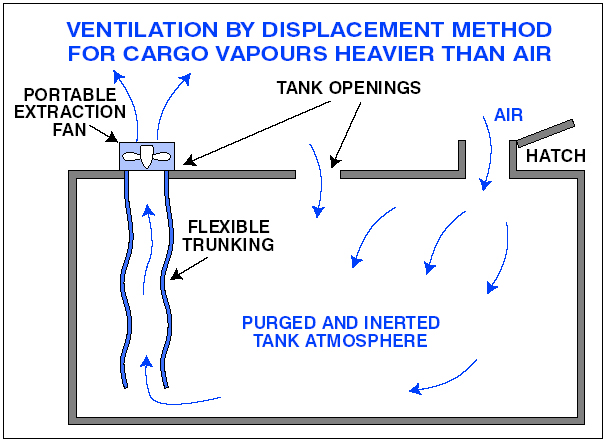 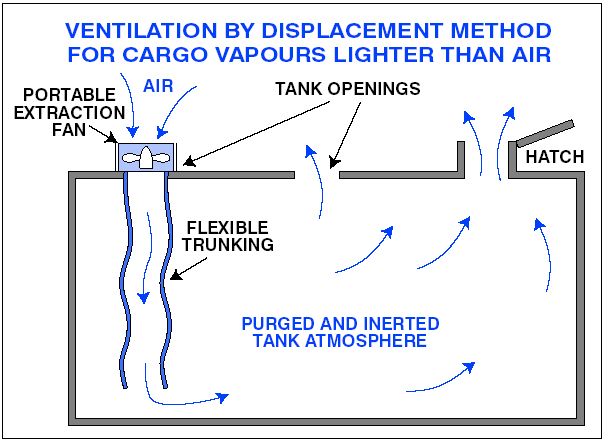 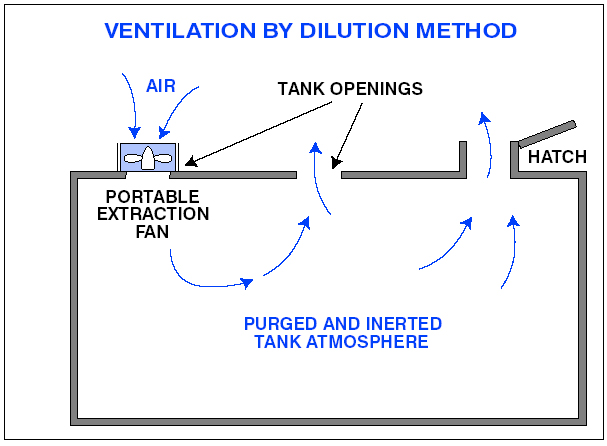 Zinc pick up by the cargo in tanks coated with PPG SIGMAGUARD 750 or PPG DIMETCOTE 9 zinc silicates may occur, depending on the cargo in question.